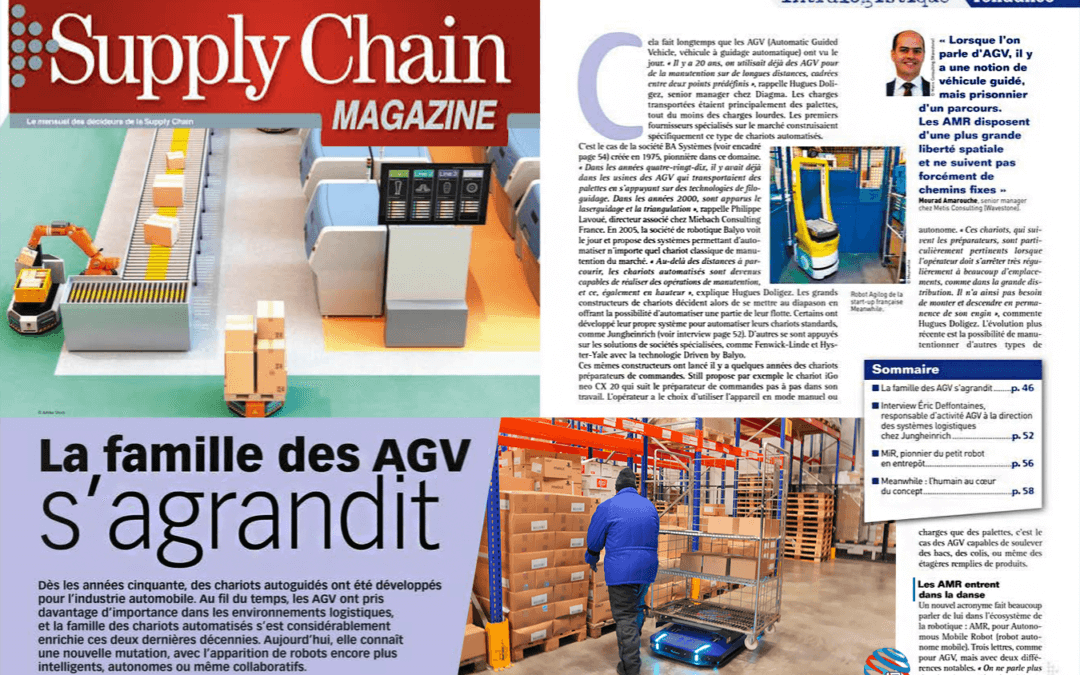 Automation of internal logistics is a recurrent issue for both large and small companies. Why use employee resources to move materials around when you can automate these tasks and have employees focus on higher-value activities? By automating material transportation, organizations can optimize productivity and can schedule deliveries more effectively to reduce production bottlenecks.

Until recently, traditional automated guided vehicles (AGVs) were the only option for automating internal transportation tasks. AGVs are a familiar fixture in large, fixed installations where there is a need for repetitive, consistent material deliveries, and where large initial cost outlays and long return on investment (ROI) can be tolerated. Today, however, AGVs are being challenged by the more sophisticated, flexible, and cost-effective technology of autonomous mobile robots (AMRs). While AGVs and AMRs both move materials from one place to another, that is where the similarities cease.

An AGV has minimal on-board intelligence and can only obey simple programming instructions. To navigate, it needs to be guided by wires, magnetic strips, or sensors, which typically require

extensive (and expensive) facility updates to install, during which time production may be disrupted. The AGV is restricted the following these fixed routes, which require additional cost and disruption if changes are needed in the future. The AGV can detect obstacles in front of it, but it is not able to navigate around them, so it simply stops in its tracks until the obstacle is removed.

In contrast, the AMR navigates via maps that its software constructs on-site or via pre-loaded facility drawings. This capability can be compared to a
car with a GPS

and a pre-loaded set of maps. When it is taught the owner’s home and work address, it generates the most direct path based on simple positions on the map. This is similar to the way the AMR is taught locations to pick up and drop of parts. The AMR uses data from cameras and built-in sensors and laser scanners as well as sophisticated software that enables it to detect its surroundings and choose the most efficient route to the target. It works completely autonomously and if forklifts, pallets, people, or other obstacles occur in front of it, the AMR will safely maneuver around them, using the best alternative route. This optimizes productivity by ensuring that material flow stays on schedule.

This autonomous operation also makes an AMR far more flexible than an AGV. AGVs are limited to following a strict route that is integrated into the facility – typically installed in the floor. That means applications are limited and an AGV perform the same delivery task throughout its service life. Changes are simply too expensive and disruptive to be cost-effective.

The AMR only needs simple software adjustments to change its missions, however, so the same robot can perform a variety of different tasks at different locations, automatically making adjustments to meet changing environments and production requirements. AMR tasks can be controlled via the robot’s interface or configurated by fleet control software for multiple robots that automatically prioritizes orders and the robot that is best-suited for a given task based on position and availability. Once a mission is established, employees do not have to spend time coordinating the robots’ work, which allows them to focus on high-value work that contributes to company success.

Suited for traditional business models vs. made for agile businesses

The flexibility of the AMRs is crucial for modern manufacturing environments that require agility and flexibility if there is a need for modifications to products or the production line. AMRs are highly adaptable for agile production in any size facility. If production cells are moved or new cells or processes are added, a new map of the building can be quickly and easily uploaded or the AMR can re-map onsite, so it can be used immediately for new tasks. This capability gives organizations full ownership of the robot and its functions. Rather than being constrained by inflexible AGV infrastructure, owners can easily redeploy the robot themselves as their business needs evolve to help them optimize production even in highly dynamic environments.

Although an AMR consists of much more advanced technology than an AGV, it is typically a less-expensive solution. An AMR does not need wires, magnetic stripes, or other costly modifications to the building infrastructure so it is faster and less expensive to get AMRs up and running, and with no costly disruption to production in the process. Because AMRs can be deployed quickly and easily, they add new efficiencies almost immediately. With low initial costs and fast optimization of processes, they offer remarkably fast return on investment–often in less than six months. As businesses grow, AMRs implementation can expand simultaneously with minimal additional costs.

Modern manufacturing environments can no longer be dependent on costly, inflexible legacy technologies. Nor can they afford to continue the unproductive manual transportation of materials, especially in today’s tight labor market. Autonomous mobile robots are superior to AGVs in terms of flexibility, cost-effectiveness, return on investment, and productivity optimization. At some point, all companies must ask themselves: Can we afford not to use AMRs?